The Ultimate Lambing Guide: The Lead Up To Lambing

Over half of the deaths faced by new born lambs can be attributed to non-congenital diseases or result from exposure to harsh elements. There are many steps that you can take to increase their chances outside the womb, but that does not mean steps cannot be taken while they are still in it. 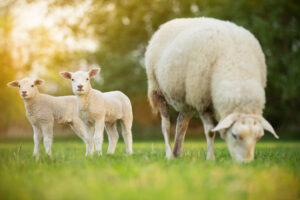 The first 6 weeks of a lamb’s life are when it is in the most danger and looking after a lamb’s mother during her pregnancy is of paramount importance if you intend to give its lamb a fighting chance during this time. To this end it is important that the ewe feeds well and keeps its own energy up as well as its unborn child’s.

Failure to prepare the mother for her lambing responsibilities adequately can result in a poor performance from the lamb itself; both as a result of its low energy in the womb and of its mother’s low milk quantity or quality once thrust upon the outside world. Either will cause the lamb to be low on energy during a critical period of its development; which can lead to severe health problems and infertility later in its life, or death.

The problem is during the later stages of pregnancy the mother may not feel like eating all that much. This is because her intake of food is limited due to the reduction in the ewe’s rumen volume; which is caused by the size of the lamb or lambs growing inside of her.

The rumen is an integral part of a sheep’s digestive process and by limiting its ability to work at optimal capacity, so to is the ewe’s ability to supply energy to itself and its lamb; which amongst other things, affects the quality and quantity of the milk produced. So you will have to be patient with it and just keep food available to it.

Whilst this is a minor inconvenience should the ewe only be having one child, in the case of twins the energy deficit can cause real problems for both the lambs and their mother. Not only will the mother be weak due to the further reduction in the rumen’s size but that limited energy will need to be shared between the three of them, resulting in low energy and other problems for the lambs; which is known as ‘twin lamb syndrome’.

One way to reduce the negative affects caused by the pregnancy is to feed the ewes and increase their bodyweight prior to mating as well as shortly after; as nutrition in the early stages of pregnancy does have an effect on the foetus’ chance of survival.

Other ways of ensuring the health of the lamb and the ewe is to administer the vaccinations for clostridial infections and Pasteurellosis to the ewe, and then administer a booster a month prior to lambing. Lambs who suckle from a ewe with clostridial disease vaccinations ought to be protected from the illnesses also for roughly 4-6 weeks.

For most farmers who rear lambs tail docking is a standard practice. Some may view it as a cruel practice, one that is carried out more for the benefit of the farmer that the animal itself; but this would in an incorrect assumption. Tail docking is not carried

Perhaps the most exciting and taxing time of year for sheep farmers, lambing season begins in January and lasts well into April, or depending on where you are, even May! Now is the time to make sure that you have full stocks of all the essential lambing equipment